Ladies and gentlemen, boys and girls, welcome to the Schuylkill River Sojourn! Prepare yourself for a week of sore arms, blistered palms, and wet bottoms! Please, put your hands together for our featured act: a 100 person, 112-mile synchronized river paddle! Get ready for the greatest show on Earth!

The woman flew in her kayak. She paddled viciously, like a shark was on her tail. Determination filled her eyes as she careened toward a man in a canoe at breakneck speed. Her boat rammed his and she lunged for the canoe’s gunwale. Her kayak teetered on its edge, nearly flipping, as she drove the side of his boat toward the water with all her body’s weight. In a blur of excitement, the canoe capsized and the woman continued her frantic paddle. She looked back, grinning at her victory and holding a black pirate flag high above her head. The chaos had begun.

It was the 21st annual Schuylkill River Sojourn, but this was my first rodeo. I was both a rookie sojourner, and a first-time sojourn guide. While my co-guides at The Bad Adventure Company were 15-year veterans, I didn’t even know what a river sojourn was and had no clue what to expect.

When I showed up to our put-in in Schuylkill Haven, Pennsylvania, I was blown away. 80 cars swamped the parking lot. The local soccer field was transformed into tent city. An enormous party filled a pavilion to listen to a local band. Who were all these people? Where did they come from? And why did they continue to come year-after-year to paddle the same canoe and kayak trip?

We started the adventure in a winding, narrow, poison ivy jungle. Trees hung low over the water and all 120 of my fellow paddlers and I floated downriver single file. Crowds lined the banks, cheering for the mighty sojourners! I couldn’t help but laugh at the absurdity of it all. I beamed with pleasure and gave my best royal wave. I felt welcomed and important.

Socializing within the group happened spontaneously. Despite coming from different backgrounds, we all had something in common: a drive for adventure. Friendships were built rapidly. By late morning on that first day, I was already getting career advice in one ear and heartfelt relationship stories in the other. A group of women in their 70s had me bent over, laughing in stitches with complaints about their saggy, wet underwear.

Come lunchtime, I cracked what the sojourn was really about. It was the food. We ate like kings. Each meal could feed an army, and overeating became a thrice daily ritual. Breakfast was eggs, sausage, bagels, cereal, fruit, and pastries. Lunch was build-your-own sandwiches with 7 bread choices, 4 cheese choices, 5 meat choices, and dozens of toppings to pick from. Seconds weren’t a suggestion, they were mandatory! Dessert tempted us at every meal. Each day, I paddled in for lunch still full from the last feast! Did this stop me from eating again? Hell no!

Nervous anticipation buzzed in the air after lunch. A Paddler’s Guide to the Schuylkill River Water Trail explained that “The Chutes” were our next river feature in the queue. This class II rapid, a 3-foot drop through a one-lane tunnel, was a common place for boaters to accidentally become swimmers. To make things more exciting, immediately before the rapid, local kids staged a water war on us. They’d shout, “WET OR DRY?,” then unleash 5-gallon buckets of river water on our heads!

Every third boat flipped, sending paddlers into the water. The drop and wave train were a recipe for shipwreck! Our Bad Adventures rescue team had more action than the Baywatch crew! We had a practiced routine: man overboard, whistle, get swimmer, get boat, get paddle, reassemble, repeat. Onlookers cheered for those who managed to make it through the drop without tipping. But, they cheered louder for those who delivered epic wipeouts. They were on the edge of their seats. We could have sold tickets for this show! 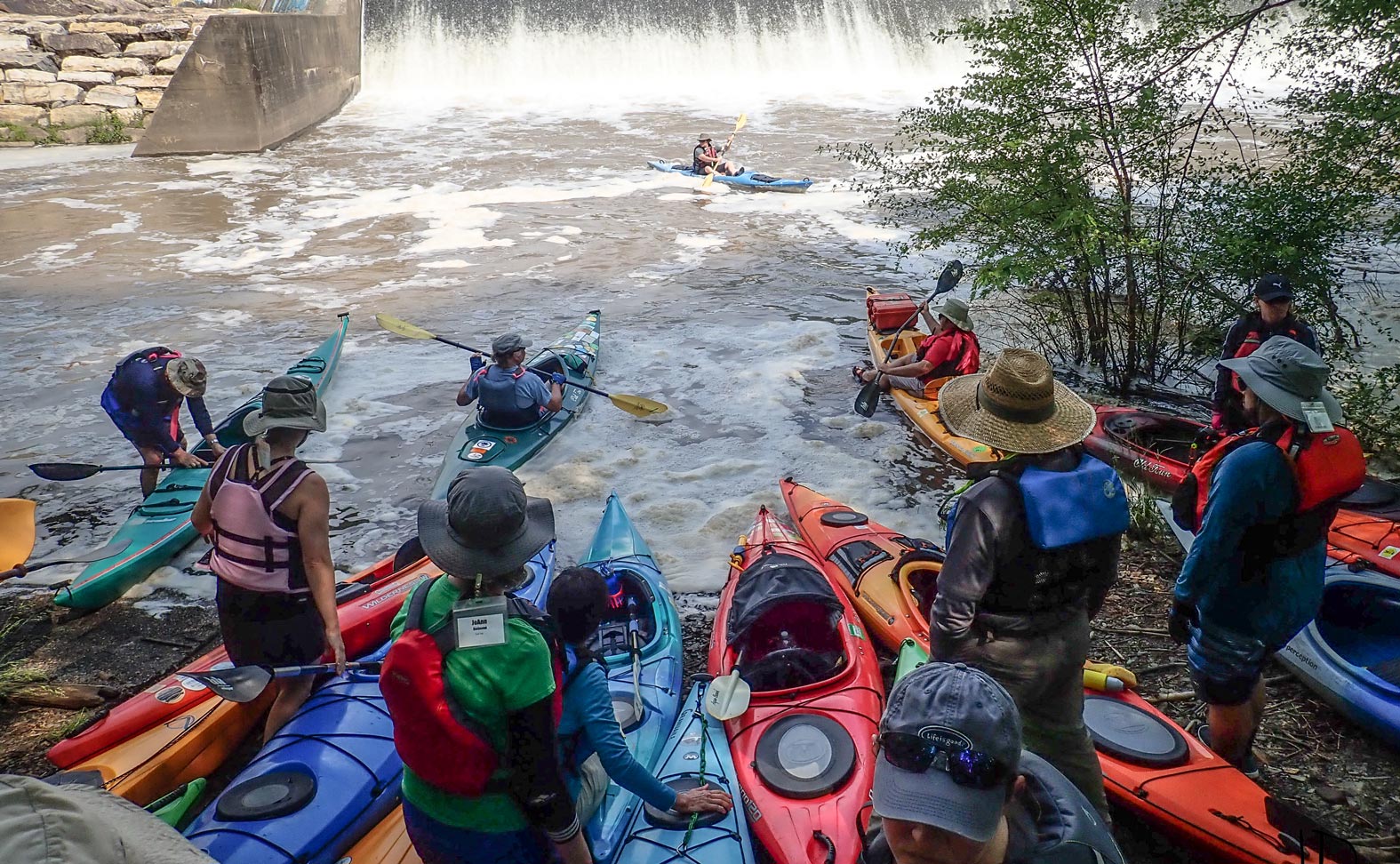 Each night we took over a new city. All 100 of us jumped ship, lined up our kayaks along the bank, and set up our tents. Locals followed us like a travelling circus. “Come! Look! The Sojourners are in town!” We made the front page of local papers. We were a hit!

In the evenings, community members joined our motley crew to present educational programs about the working river. However, I felt distracted. The history was important, sure. But, I was more intrigued by our impact on the present state of the towns we passed through. We supported local restaurants and civic organizations who catered our extravagant meals. We visited local parks and trail systems. We brought attention to the important life force in each community's backyard: the Schuylkill River. We were a movement.

The rapids we tackled, like the Chutes, Kelly’s, and Flatrock, kept the group on its toes. The days with the most wipeouts were exciting and exhausting enough for us to sleep through nightly train whistles. We bonded over the struggles. When canoes overturned, other boats swarmed to help. When swimmers headed straight for a submerged tree, dozens of hands reached to offer assistance. A web of trust formed in the group.

However, the days with less excitement were when I really discovered the community of the Sojourn. Six previous strangers paddled in unison, laughed giddily, and engaged in happy conversation. Full-grown adults launched pirate attacks on each other to capture the flag. Grandparents stood up in their kayaks for the first time. Experienced paddlers taught techniques to newbies. Without meaning to, in just a few days, we became best friends. We teased each other. We pushed each other to try new things. We made each other better.

As we approached Philadelphia, trees gave way to high-rise apartments. At each campsite, the train tracks inched closer to our tents. The urbanity felt shocking. The approaching city atmosphere reminded me that our adventure was coming to a close. I did not want it to end, though. I had become accustomed to my daily routine of Scuky travel.

We had a ring leader: our lead boat, the person directing the party. We had a caretaker: our sweep boat, the one in the back who tended to the needs of the group. We had an animated maestro: our fearless lead guide who kept the crowd laughing. We had stunt artists: athletes attempting to hang ten on their kayaks and keep the crowd entertained. And, most importantly, we had 100 performers: sojourners who made our performance possible and brought energy to the group. For a seven-day limited run, we were the greatest show on earth.

I had met this crowd only a week earlier, but I felt like I knew them my whole life. I walked away after seven days with 100 new best friends. At our final take-out in downtown Philadelphia, my chest tightened as it sunk in that I would not see my friends for a whole year.

After the week-long trip, I feel certain there’s something special about the Schuylkill River Sojourn, besides just the food. The Sojourn is a journey, but it’s also a community. Sojourners don’t show up year-after-year just to paddle 112-miles. They show up for the people. People who push their limits. People who offer helping hands. People who share their passion for an incredible resource in their community. The connections I made with them are worth more than gold.

Natalie Bukovec is a Bad Adventures backpacking, kayaking, and hiking guide. She leads amazing, over-the-top adventures in Colorado and Utah during our summer season. When not guiding, you can find her training for a marathon, studying to be a chemical engineer, and scheming far-flung travels.